We were getting desperate for a place to stay when we saw the motel sign … a large shabby sign reading simply, MOTEL. We had been looking for accommodation all afternoon and it was getting a little late in the day to be driving secondary roads in Cuba. Alan pulled to a stop and we walked back to the large gate which marked the entrance. 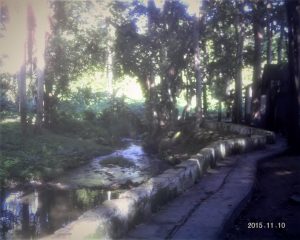 The gate was locked, which was odd, but down a long driveway, a man in a tan uniform was trudging slowly up the hill towards us. From the gate we couldn’t see a motel, but it was certainly worthwhile asking. As a couple of well-traveled Canadian seniors, we are more cautious than we used to be and we did not want to drive secondary roads after dark.

“Tienes una habitacion por una noche?” I asked in my only slightly better than travelling Spanish. The man nodded and opened the gate, pointing us at a drab cinderblock building at the bottom of the drive. Inside the “Oficina”, two attractive young women, also wearing smart tan uniforms, gave us a friendly greeting. Yes, they could give us a room for the night. Did we want dinner as well?

The conversation was pretty much all in Spanish, and it was difficult to understand them. “Mas lentemente, por favor”, didn’t help, although they did slow down a little. But there was some dialect or intonation here that was different from the Spanish I’d encountered over the previous two weeks of our Cuban road trip. 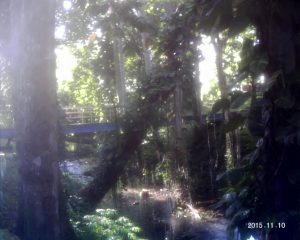 The upshot was that Carmela indicated that we accompany her to the kitchen to see what was cooking, before we registered. We didn’t understand why we needed to do that, but it seemed best to go along with her. Another hundred metres down the road, past a large swimming pool –  where a dozen kids were splashing – we came to a large pavilion, but veered off and went around to the back.

There, in a sort of open shed, the cook was busy at his stove. This was a long low table with three enormous pots bubbling on individual gas burners. He was an older fellow, a little overweight, wearing a tee shirt that could use a wash, but hey, it was the end of the day. He quickly realized that showing was better than telling and lifted the lids from his pots one by one to reveal a savoury beef stew, a pot of rice and one of of beans.

There was enough food to feed fifty people, but so far we hadn’t seen any people, other than the kids in the pool and the staff. Nor had we seen anything we recognized as motel units. We did what we could to say, yes, it looks delicioso and gracias, we will have dinner. A que ora? Carmela asked. We agreed on 8 o’clock.

Now, she said, I will show you your cabana. And across a large expanse of lawn, we could see a metal bridge leading to a row of cinderblock huts. Carmela led us past a small playground and over the bridge with a pretty little stream gurgling below. She stopped in front of No. 10, its cinderblock painted a cheery blue and yellow, but much in need of freshening up. The paving stone path along the river was neatly swept and despite the overall shabbiness, it was delightful to find this shady, green and cool place. In fact, it was altogether lovely with tall trees and shrubs lining the river bank. 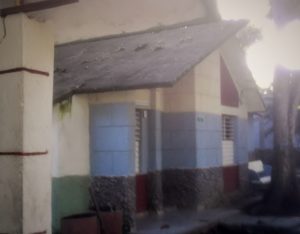 The cabana, however, was less than lovely. It was old and tired; there was mould in the corners, and paint was peeling from the window frames. The building comprised a small living room, furnished with a small table and two orange plastic chairs, one of which was broken. The larger of two bedrooms contained two single beds made up with clean white sheets. A single lightbulb hung from the ceiling. There was no closet nor wardrobe nor dresser nor shelf nor chair nor night table. The window was louvred but the torn screen was not going to keep bugs out.

However, we had a place to sleep and we were going to get dinner, and all of this for seven CUCs or approximately seven US dollars. By now it was twilight. The idea of driving on in search of another place to stay was not an option.

Besides, we were tired and thirsty. We had driven over 400 km that day, from a little village near the western tip of Cuba. It had been a long, hot day. The plan was to stay in a town called San Antonio de los Baños, but to our dismay, the one hotel was full! And after San Antonio, we had not seen a single hotel or “casa particular” in any of the villages we passed through.

While Alan went back to the office with our passports to pay, I explored the cabana further. There was a room one might call a kitchen, in that there was a large concrete sink with draining board attached, and several empty shelves. Carmela had plugged in the ancient refrigerator which was grumbling away. And there was another lonely light bulb hanging from the kitchen ceiling which didn’t work. The bathroom was probably as clean as it could be. There was a toilet, and toilet paper –  I knew to check that – and a sink. There was also a tap on the wall with a hose attached and a drain in the floor. That was the shower. There was no hot water.

Then I took a little walk along the riverside path to see what I could see. There were a dozen cabanas altogether, and most seemed closed or at least unoccupied. Dead leaves festooned the porches, plastic chairs were tilted up. But there was plenty of activity at No. 3. Half a dozen husky men sat outside drinking beer, while others were coming and going from inside. Lively Cuban music emanated from the interior. They were clearly working men, of different sizes and shapes, some young, some late middle age. I realized then that somehow we had stumbled upon a government rest camp. I suspected they weren’t supposed to let us stay, but they had seen our predicament and generously bent the rules.

Alan returned bearing a couple of bottles of very welcome cold beer, so we liberated an unbroken chair from the cabana next door and relaxed. Eight o’clock came quickly. Dinner was very good indeed, the servings were generous and the service was excellent. The wait staff – there were three of them – were all younger women nicely dressed in black skirts, white blouses and frilly aprons. Another woman, the bartender, wore a shiny silver cocktail dress and full make-up. It occurred to us that she might also provide the after dinner entertainment. However, we ate in solitary splendour in the al fresco pavilion, a space that would easily seat a hundred. Around nine, the men from Cabana No 3 –  who had clearly enjoyed their “happy hour” – arrived for their meal.

We slept well enough and had a cool rinse if not a shower under the hose in the bathroom. Breakfast was spartan and, there being nothing to keep us, we were on the road by ten o’clock, thoroughly pleased with our little adventure, and grateful for a truly unique experience of real Cuba. I think of this now when I hear complaints about the relentless pestering of panhandlers and touts in Old Havana. The experience didn’t so much change our view of Cuba as it did to reinforce our belief in the essential generosity and hospitality of the Cuban people.

What I found out later: Starting in 1981, campismos were built in natural reserves or untouristed beach areas. There are eighty of them spread across Cuba, but only ten are permitted to accommodate foreigners. Of course, Cuba wouldn’t be Cuba if everyone followed the rules. Many of these camps were built several years ago, which accounts for their shabby, but essentially clean condition. Cuban nationals coming on holiday bring everything they need; that explains the unequipped kitchen. 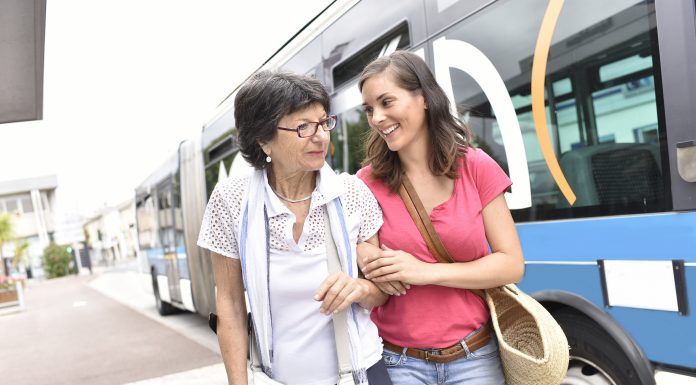 How To Talk About Finances With Aging Parents

5 Things You Can Do to Reduce Menopause Symptoms

Why Using Executor Assists Is A Good Decision

What Are Grandpa’s Vehicles Worth?